Posted by Ellen Piligian on 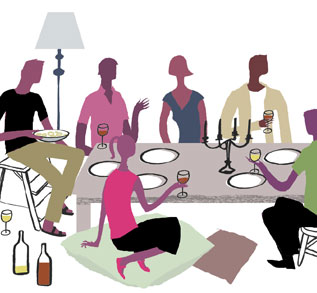 We originally had this event scheduled for Feb. 25 but had to cancel due to a — big surprise — snow storm.

So now we look forward to seeing you two weeks later for our Community Dinner at the home of Alissa Sevrioukova (SIPA '14), who has graciously offered to host us for a cozy dinner.

The menu includes salad, roasted chicken and curried cauliflower from Jesse Knott, a local chef who hosts the Detroit Delhi pop up and is now a chef at the newly opened Standby. There will also be a vegetarian dish for those who request that (see below). Dessert will be from Coffee and (____), a local coffee shop just two blocks from Alissa's house.

Alissa also will have an alcoholic punch bowl and two bottles of whiskey from Detroit City Distillery, as well as water and club soda.

Meanwhile, as always, we ask guests to bring a beverage to share, from soda to wine to whatever you wish.

We are limiting RSVPs due to space at 20, alumni only this time.

If you are vegetarian or vegan, please let Alissa know so she can get a headcount for those folks. Also, if you have any major food allergies, that would be helpful for her to know. Please email her with that info after you RSVP.

Alissa's home includes two kittens and a dog which will likely be upstairs for the duration of the dinner. However, anyone with extreme allergies might want to sit this one out.

Parking and the Jefferson Chalmers Neighborhood:

There should be plenty of parking along her street (east side of the street only). Alissa also has a long driveway that can probably hold 4 to 5 cars tandem, so that will be first come, first served on those spots.

Jefferson Chalmers is a residential and commercial neighborhood on the lower east side of Detroit that stretches from Conner Street to Alter Road, sharing a border with Grosse Pointe Park. The Jefferson-Chalmers Business District, which runs along Jefferson, is a historic, early 20th Century neighborhood commercial district, which during the 1920s, was the center of the east-side neighborhood's commercial, social, and cultural life. The homes in the neighborhood consist of bungalows and Arts and Crafts houses built in the early 20th Century, and many residents of the neighborhood have been there for decades. Over the last decade, the district has seen a resurgence, with five million dollars worth of streetscape improvements and rehabilitation of a number of anchor buildings in the district, and many more businesses and developments are set to take off over the next few years.

Invite your friends to join you